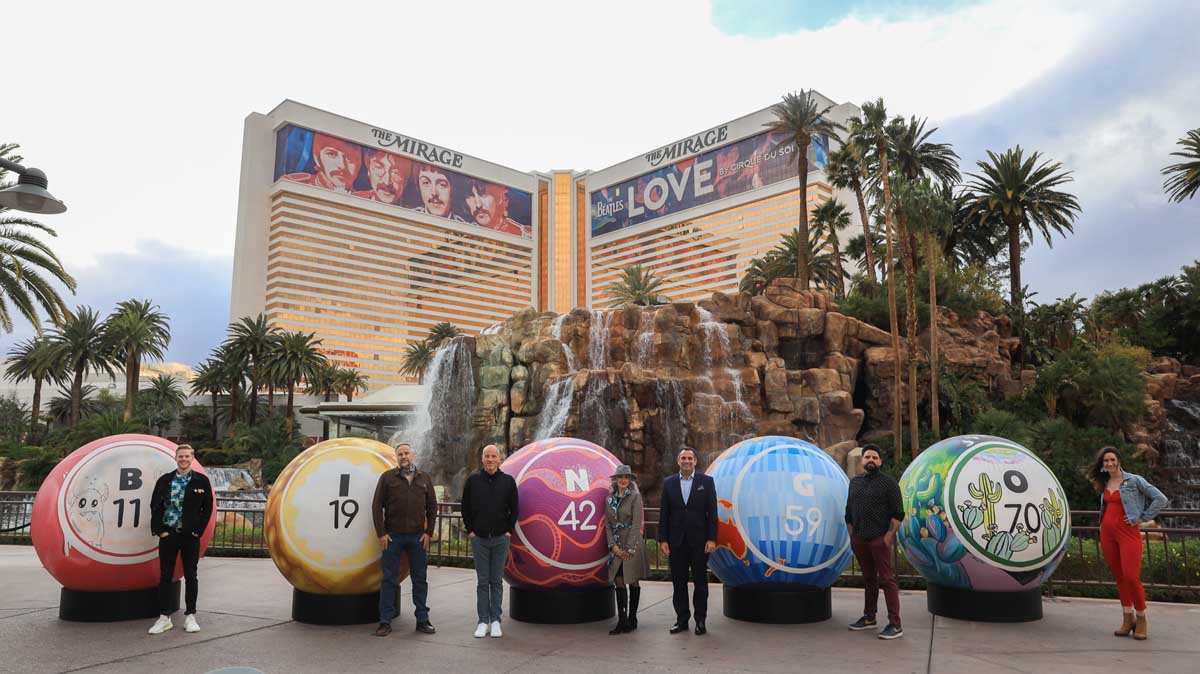 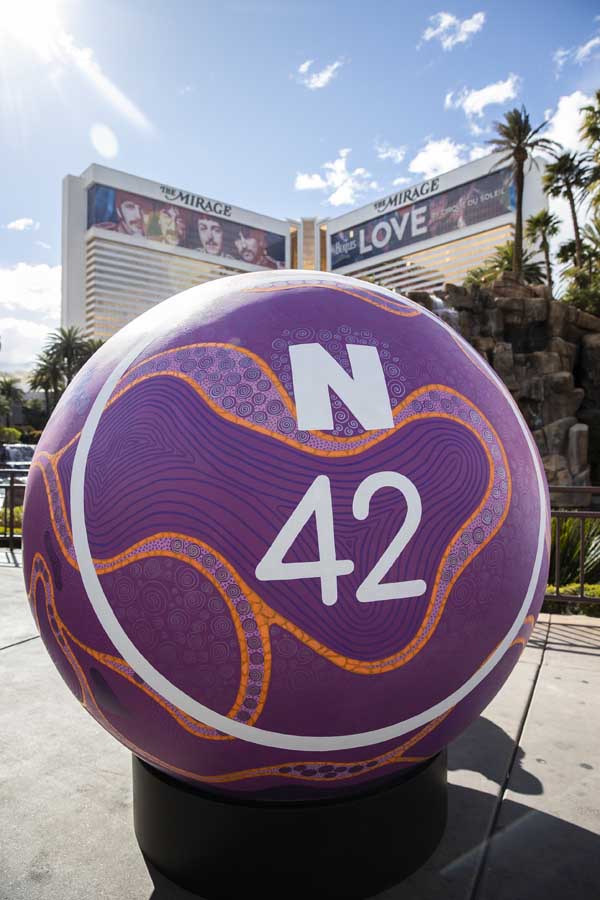 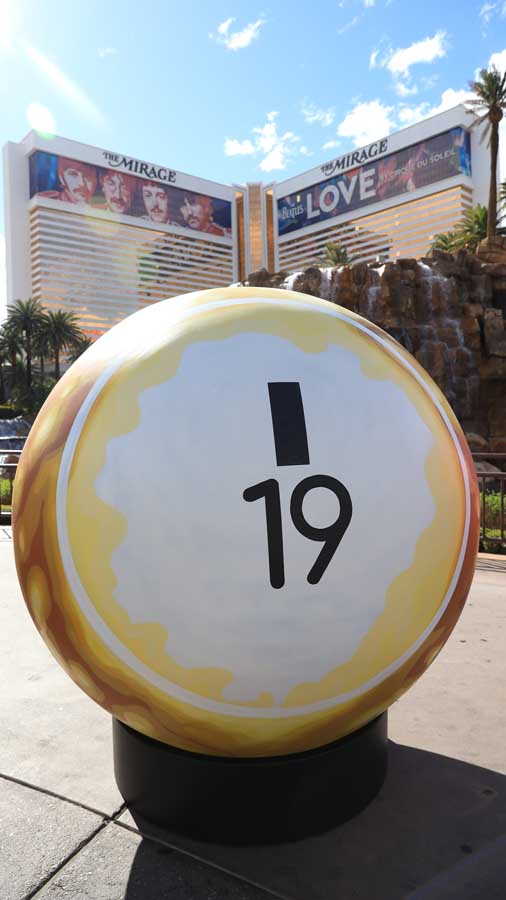 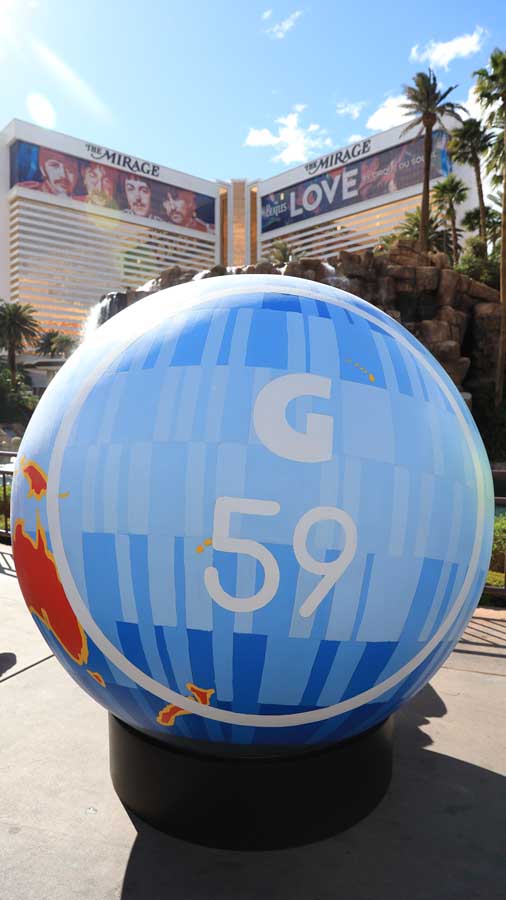 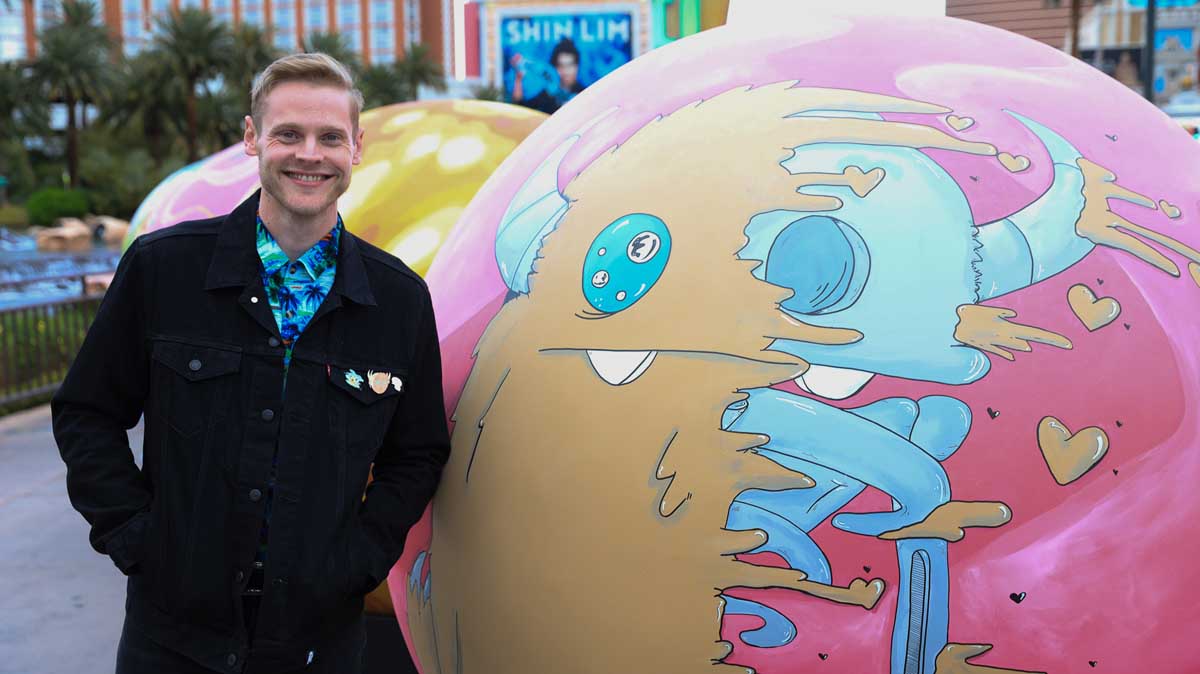 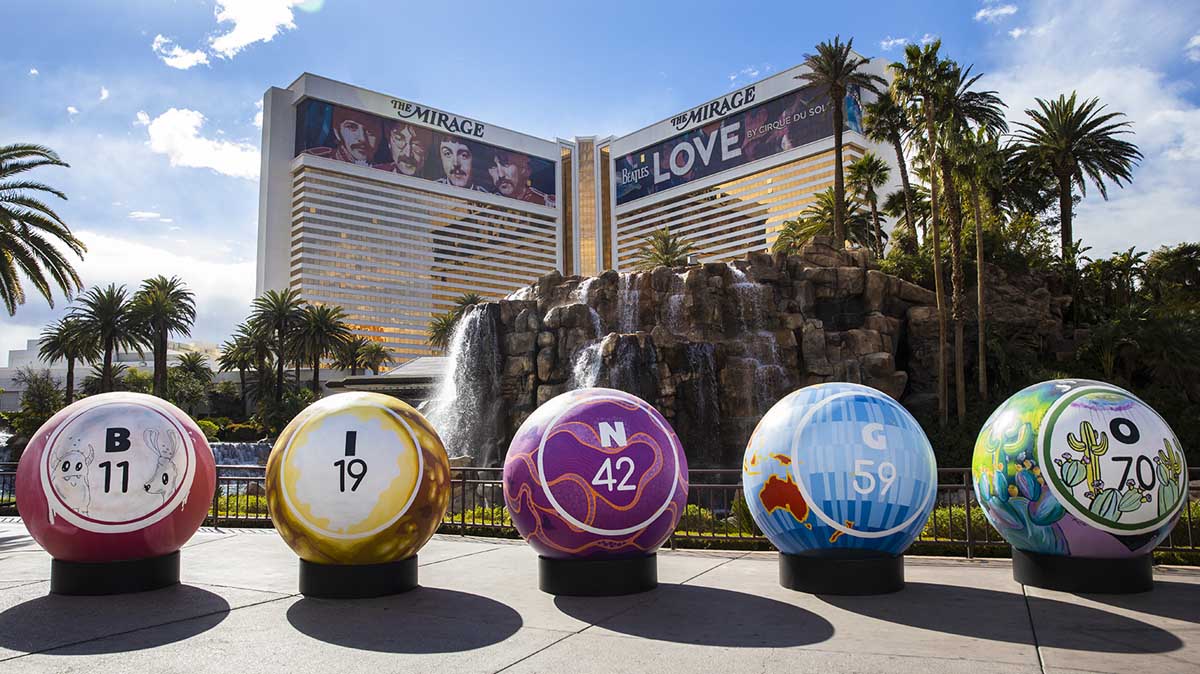 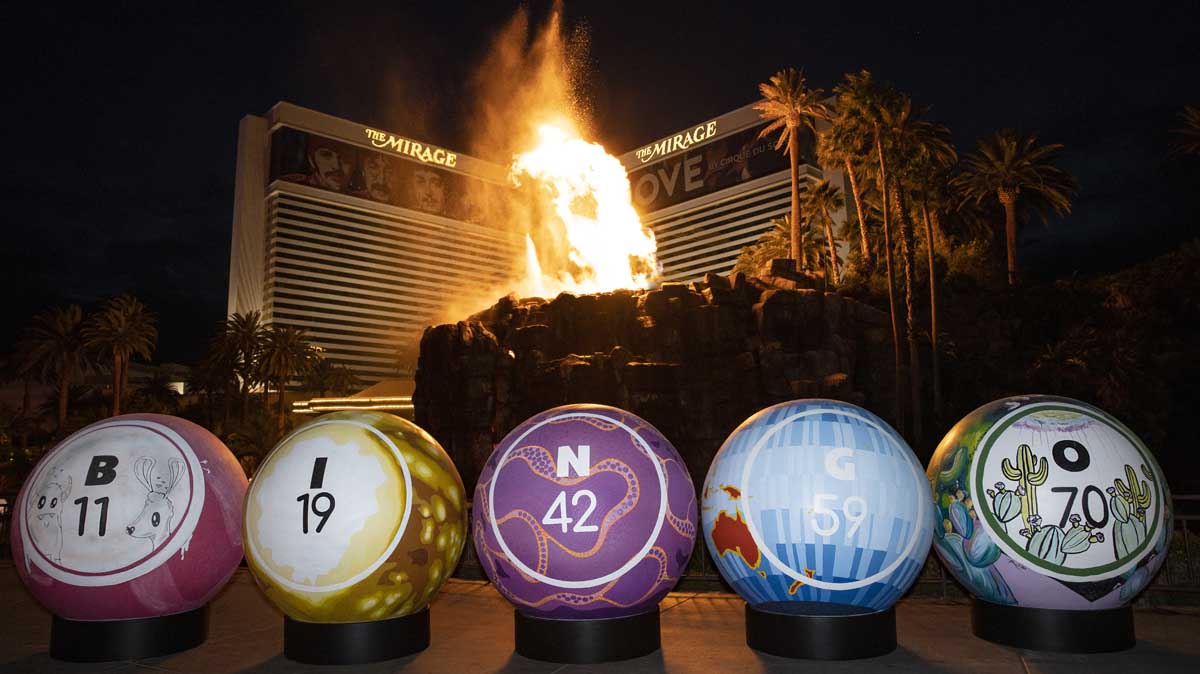 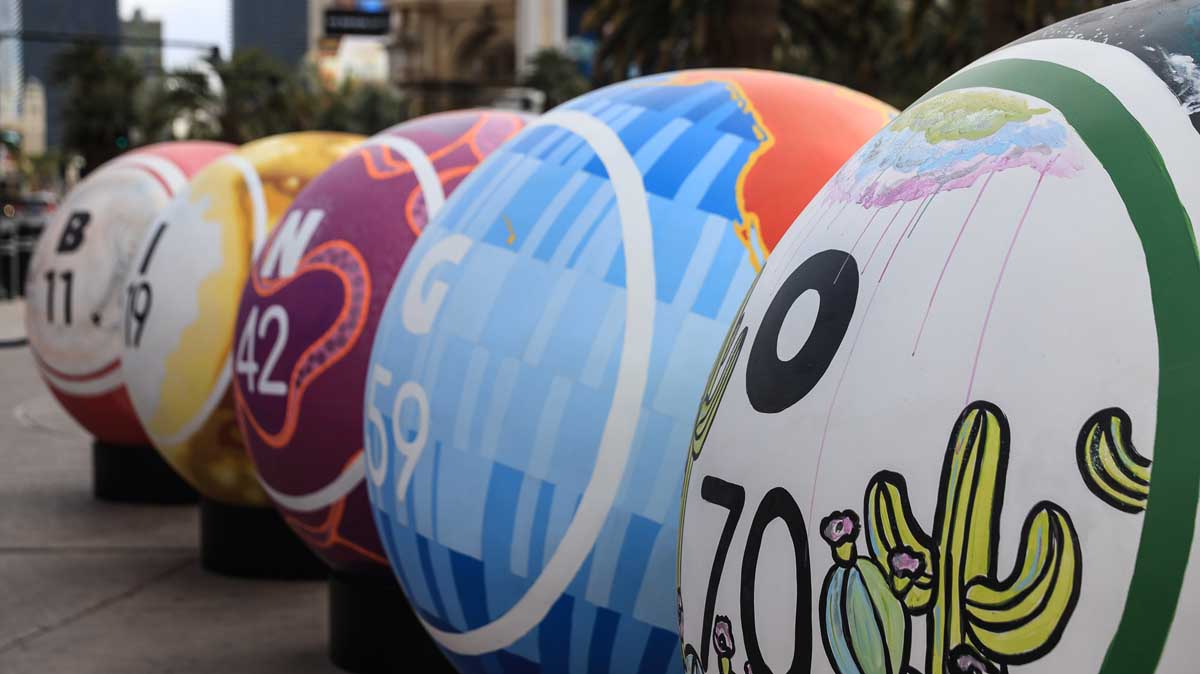 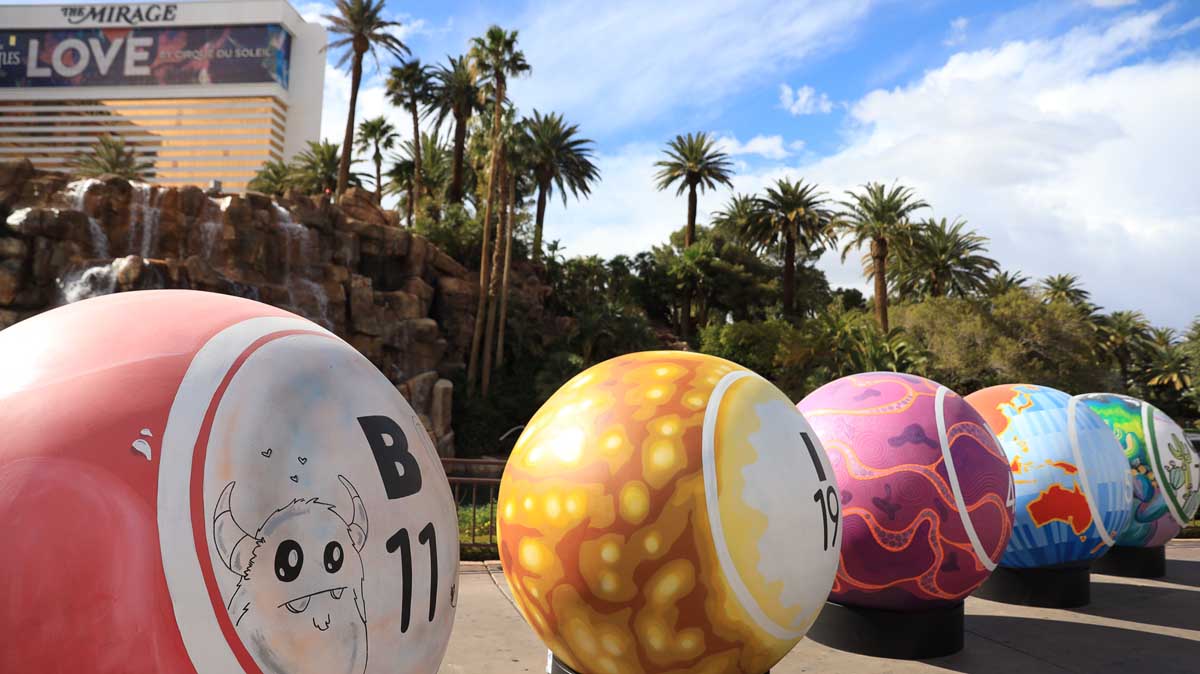 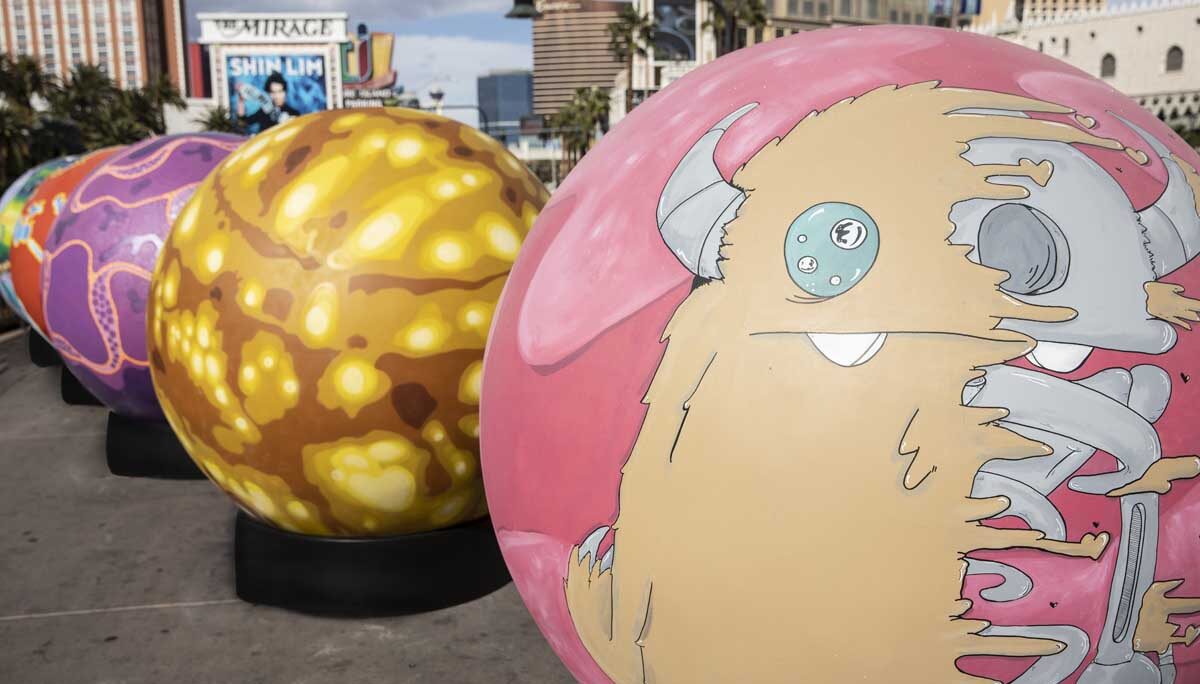 We created a one-of a kind community collaboration engaging five local artists. As we reached the creative community our client Playstudios was completing their award winning mobile game. FW began fabricating bases and giant spheres to resemble bingo balls. Beginning April 1, 2021, the five local creatives selected for the “Lucky Numbers” campaign expressed their personal visions on giant bingo balls installed in some of The Strip’s most iconic locations. We provided stencils, giant balls sanded and ready to paint on sleek black bases. Our fabrication shop became an art studio and place for the artists to come together and start their creation on the giant balls we fabricated. The artists diverse styles and backgrounds are a reflection of the gaming portfolio and global community of players.
Steve Zanella, Chief Commercial Officer of MGM Resorts International says, “Our creative community is one of Las Vegas’ most valued treasures. Offering a showcase for these memorable works of art is a wonderful way to launch myVEGAS Bingo and celebrate our decade-long partnership with PLAYSTUDIOS.”

The artists we secured, and their corresponding bingo balls, are:

B11 – Ryan Brunty is a Las Vegas-based interdisciplinary artist and founder of Depressed Monsters, LLC., a lifestyle brand and mental health advocacy group whose products are sold at Hot Topic, Zappos, Amazon, Box Lunch, and depressedmonsters.com. Brunty’s work focuses on his character Yerman, a self portrait that saved his life in 2012 after the death of his grandfather. Brunty’s mental health journey has been adapted into public speaking engagements and tools in psychotherapist’s practices across the country. Mr. Brunty’s bingo ball is located at Mandalay Bay near the valet entrance adjacent to the M Life Rewards desk.

I19 – Jerry Misko’s art reflects the soul and spirit of Las Vegas, his hometown, with intoxicating imagery and iconography inspired by memories of late nights and neon lights. His work is frequently in demand among private collectors worldwide and is featured in corporate collections from Saks Fifth Avenue to Cirque du Soleil. His clients, including the Las Vegas Convention and Visitors Authority and MTV, have tapped into Misko’s talent to enrich and uplift their environments. A conversation, a canvas, and a commission are the first steps toward a visual feast as only Sin City’s preeminent muralist can provide. Mr. Misko’s bingo ball is located at The Mirage Volcano lagoon.

N42 – Nancy Good was born in Texas and has lived and worked in Las Vegas since 2011. Her creative pursuits over the past three decades have been heavily influenced by her travels to Australia, Africa, and Vietnam; a childhood residency in Japan; adult life experiences as an artist, photographer, musician, fly-fishing guide, backpacker, and writer; her time as a teacher in Montana, Nevada, California, Tennessee, and Illinois; and her eclectic DNA revealing ancestral connections to cultures the world over. A common thread through Good’s work is how she employs materials and tools of modern times while playfully drawing upon the aesthetic conventions of ancient cultures, including symbology and primitive mark-making. Ms. Good’s bingo ball is located on the New York New York Brooklyn Bridge.

G59 – Miguel Rodriguez was born in Wichita, Kansas and grew up in the city of Leavenworth, alongside the Missouri River, surrounded by green vistas, big skies, old homes, and farms. He graduated with a Bachelor of Fine Arts from the Kansas City Art Institute, then moved to Las Vegas in 2001 to pursue his Master of Fine Arts degree from UNLV. He’s lived here ever since. Over the past 19 years, Rodriguez has shown his artworks throughout the Las Vegas Valley. Aside from his ceramic work, he’s created multiple large scale publicly and privately funded sculptures and murals. Currently, he teaches Ceramics and Sculpture at UNLV. His art is always colorful and dynamic, drawing inspiration from science, popular culture, and current events. Mr. Rodriguez’s bingo ball is located on the Excalibur lobby adjacent to the front desk.

O70 – Mary Felker is currently working full-time as an artist in Las Vegas and focusing on depicting the beauty of the desert, the city, and the greater southwestern region. Felker’s art has been showcased throughout Las Vegas, at First Friday and Market in the Alley, and online on her Etsy Shop @MaryOnAdventures. Felker’s artwork has also been featured on the cover of Desert Companion and in Las Vegas Weekly. Ms. Felker’s bingo ball is located on the MGM Grand main lobby adjacent to check in desks.

We set up cameras throughout the studio and edited a timelapse as well as capturing short interviews and audio clips. Once the artists completed their work we added a protective clear coat to protect their art and delivered them to their new home on the strip for all to see.